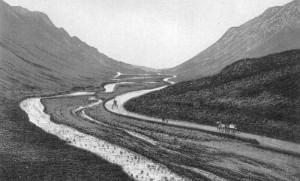 An early photo of Barnesmore Gap 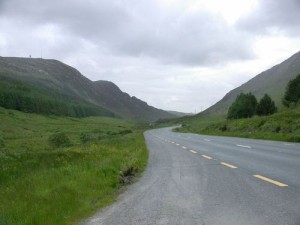 Barnesmore Gap is that big opening between Croaghconnelagh (Connall’s mountain) and Croaghonagh (Owen’s mountain). Here in this very fine mountain pass the traveller is absolutely shut in between these two great hills as he wends his way along a really excellent road that traverses the gap. 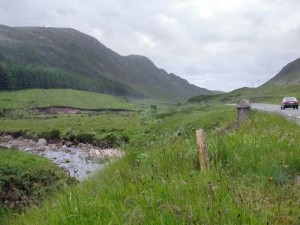 These are rugged and gaunt grey mountains which, from a distance, give off a hue of blue, and for three miles on either side the traveller is between massive cliffs and yawning rents cut by streams racing down the mountain and falling into the noisy Lowerymore river. This river keeps company with the main road as far as Lough Eske where it joins the River Eske.

From this description by Patrick Campbell one would think Barnesmore Gap was a wonderful place for travellers. For centuries the Gap has been a strategic gateway between northern and southern parts of County Donegal. But Barnesmore was also, in other days, a place of sinister repute. For several hundred years up to about 1800, it was the notorious haunt of brigands, highwaymen and raparees who waylaid, robbed and murdered travellers.

Pat Kelly of Cashelnavean tells us that all the way down into the Gap was covered with trees and shrub wood and there was nothing but a bridle-path going through the place. This foliage was cut down as the robbers used to pounce out of the undergrowth and have the travellers robbed before they knew what had happened to them. It became so perilous that from the mid 1700’s a garrison of Red Coats was stationed at the Ballybofey end of the Gap to ensure the safety of travellers.

A report in the Derry Journal of early July 1773 reads…

“On the 29th of June 1773 a young gentleman who was on his way from Sligo to Derry was attacked in the Barnesmore mountains by two ruffians armed with hangers. Endeavouring to defend himself his whip was cut right through with one stroke and his horse deeply wounded. However on recovering a little from his surprise he fired his pistol at the villains and clapping spurs to his horse he fortunately got clear of them without damage.”

On Wednesday last, the 1st inst., as Mr. James Ferguson, shopkeeper in the town of Donegal, was coming to Ballybofey he was attacked at the Bridge of Barnesmore by two men and a woman. They first stabbed his horse, and then himself, with a knife, and dragged him some distance off the road, when they cut open his saddle-bags, and from thence took 68 guineas in gold, 10 English shillings, 24 ounces of broken silver, and two silver watches.

Providentially the horrid transaction was discovered by a boy who was looking after some cattle on the mountain; otherwise Mr. Ferguson might have soon died of his wounds without any assistance, and the robbers escaped justice; but the same day, they with two of their accomplices, were taken at an alehouse not far from the spot where they committed the cold deed, and all committed to Lifford gaol. Mr. Ferguson’s recovery is very doubtful, and the horse is dead. (Derry Journal, June 7, 1774.)

Following this attack, five persons, four men and one woman, were arrested, charged with the robbery and were tried on the 22nd August 1774 at the Assizes held at Lifford.

The Derry Journal gives us this account of the proceeding…

On Monday last, the 22nd inst., at the Assizes held at Lifford, for the County of Donegal, Patrick Gordon and Henry O’Neil were tried and found guilty of robbing Mr James Ferguson, of the town of Donegal, and sentenced to be hanged on the 8th September next, at the bridge of Barnesmore, the place where the robbery was committed. At the same time, the wife of the said O’Neil was also tried for robbery, and found guilty; but she having pleaded pregnancy was examined by a jury of matrons, who gave their verdict that she was pregnant, whereupon her sentence was postponed until after her delivery. The other two men who were tried for the same robbery were acquitted.

The sentence passed on Gordon and O’Neil was duly carried out, as is proved by the following entry in the Grand Jury Record Books for the year 1775…

“We present £10 – 0s – 0d of the County(funds) to be paid to Peter McDonagh, Gent., late sub sheriff, for transmitting Patrick Gordon and Henry O’Neil, to the Bridge of Barnesmore, where they were hanged.”

An interesting sequel to the arrest and conviction of Gordon and the two O’Neils, and the information that Mr Ferguson probably recovered from the attack, is apparent in the following notice published by the Grand Jury in August 1774…

“Whereas the uncommon Honesty and spirited Conduct of the Family at the Lough House on the Mountains of Barnesmore deserves every Mark of Approbation for their Behaviour, in so zealously exerting themselves in apprehending the Perpetrators of a Robbery and cruel intended Murder, for which three of them were at the, Assizes capitally convicted; We, the Grand Jury and Gentlemen of said County, think it incumbent on Us to give them this public Mark of our Approbation, together with a pecuniary Reward, which, We hope, will be an Example and Encouragement to all such People to assist and bring to Justice every Person who shall so grossly violate the Laws of their County.”

“A man named McMinnaman (McMenamin) was tried for robbing a servant man at Barnesmore, and sentenced to be executed some day newt December” (Derry Journal, Sept. 22. 1775.) 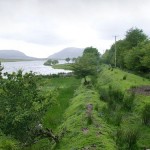 We presumed that the sentence was carried out in the Gap in December 1775.

In 1780, Prionnsias Dubh Mac Aodh was the Captain of a gang of twelve who robbed the rich to feed the poor and his favourite haunt was the Gap of Barnesmore. Two of the gang, named Cassidy, were hanged in Barnesmore and Prionnsias Dubh was made to stand trial in Lifford and was also sentenced to be hanged.

Executions took place at the gap for a number of years before a more permanent gallows was built. Pat Kelly of Cashelnavean tells us the story of three sheep stealers…

“There were three men hanged down at the bridge before you go into the Gap. They were hanged for sheep stealing but they were innocent. The gallows wasn’t there then and they were hanged off three trees in that area.”

The following extract from the Lifford Grand Jury Books may be seen in the County Library:

“We present £7. 10s. of the Savings of the County-at-large to Thomas Young, Esq. Of Loch Eske to reimburse him for the like sum expended in building the Gallows at Barnesmore.” (The year was 1777).

In an account given by Caesar Ottaway, when passing through the Gap in 1839, he mentions the ruin of a barracks at the Northern end of the Gap. It is believed that the military outpost or redoubt was set up here about 1750. The company of Red Coats stationed here were used to patrol the Gap to keep the robbers and raparees away. 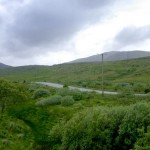 Pat Kelly of Cashelnavean tells us that one night two women rushed into the barracks and said that a big gang of robbers had just held up some travellers down in the Gap. All the soldiers ran for their horses and galloped off like blazes down the brae and into the Gap and while they were away the two women held up the guard and robbed the barracks. The two women in question were really raparees dressed in women’s clothes.

The area above Barnes Bridge, around the site of Elvin’s house, became known as Barrack Hill. It is probable that this hill may have got its name from the red Coat Barracks which was abandoned circa 1800 when a more substantial Red Coat Barracks was set up in Stranorlar. 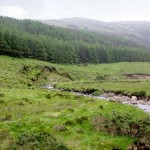 In recent years, the remains of the 18th Century Gallows was still to be seen as one goes down into the Gap from Ballybofey. It was situated on Elvin’s land on the left hand side and about 150 yards in from the road at Barnes Bridge. It may be possible, with reasonable accuracy, to pin-point the site of the Gallows and mark the place in a suitable way which would be of interest to both locals and tourists alike.

Have a pleasant journey on your next trip through ‘The Gap’.