The Blind Poetess of Ulster 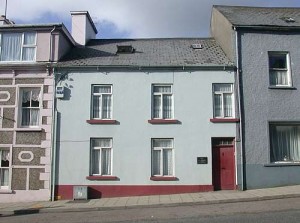 Few people today have heard of the name Frances Browne, but in the mid 1800s she was to the fore of the literary world, writing many poems, novels, children’s books and many articles for newspapers. She was known throughout the publishing world and compared with the best writers of the day.
The loss of sight did not stop her determination to get an education, and go on to become one of the best writers this country has ever produced.
Until recently there was little information known about Frances Browne as her memory and work got lost or misplaced over the years. It was only recently as the result of continued research, along with my fellow historian, Reverend Raymond Blain from Stranorlar, that a number of new and exciting discoveries have been made which made the book ‘The Life and Works of Frances Browne’ possible.
History is an important part of our past as it teaches us about our successes and failures. The story about the life and works of Frances Browne is one of those successes that we are proud to record in the annals of our local history.
Frances Browne was born at Upper Main Street, Stranorlar, on January 16, 1816. Her great grandfather was a man of considerable property but managed to squander it all, with the result there was no benefit to her father’s generation.
She was the seventh of twelve children born to the first Postmaster in Stranorlar.
Blinded, the result of smallpox at eighteen months, Frances strove with all the strength of her own will to overcome the handicap of blindness and educate herself. 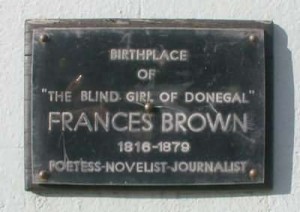 She first took an interest in the meaning of words as a result of attending Sunday service with her parents when she was seven. If Frances didn’t understand a word, she persisted in querying adults and friends until the meaning of the word was explained. She did not attend school in her young days, but played around the house and doorway of her home.
Many passing locals on entering her father’s post office would have greeted her and in many ways this attention kept her mind alert.
Occasionally during the day when her mother had time she would sit with Frances and tell her fairy stories, and we all know the fairies were very popular in Ireland in those days.
In later years, when Frances became a renowned writer, she understood the value of such stories for children and wrote a famous children’s book called ‘Granny’s Wonderful Chair’.
This book became a best seller in the mid eighteen-hundreds and still sells today in countries all over the world. In the evening time when her brothers and sisters were seated around the kitchen to do their homework, they were made to read their prose or poetry aloud so Frances could listen. It wasn’t long before it was noticed that Frances could recite many verses before her siblings had the work learned.
Her talent for poetry developed early, beginning with rewriting the Lord’s Prayer in verse at the age of seven. Her memory was remarkable and her quest for knowledge was insatiable to the point where Frances would bribe her brothers and sisters to read to her as many books as she could lay hands on, and she did this by carrying out their household chores.
As she grew older, she may have attended school occasionally as she stated in a letter to a friend that she “…listened to the village teacher explaining lessons to her brothers at school.”
Mr McGranahan was the school teacher in those days, and we know that he lent Frances books when she was around thirteen years old. He also taught Isaac Butt and William McArthur, later Lord Mayor of London.
Her first published book of poems was called ‘The Star of Attenghei’ and it was this work which really sprung her to the literary stage and earner her a pension of twenty pounds per annum, granted by Sir Robert Peel from the Royal Bounty Fund.
Frances went to Edinburgh in 1847 to further her career and eventually moved to London in 1852. Her industry was remarkable, writing numerous pieces for the newspapers and periodicals of the day, as well as children’s books, novels, poetry and short stories.
Her workload was great and eventually Frances fell into poor health. All her brilliance did not make her rich, yet despite her own poverty she tried to relieve that of her mother’s. Frances Browne’s work was help in the highest regard and she received praise from many circles in the literary world.
Her major works were: ‘The Star of Attenghei’, ‘Lyrics and Miscellaneous Poems’, ‘The Erickson’s’, ‘Pictures and Songs of Home’, ‘Granny’s Wonderful Chair’, ‘Our Uncle and Travellers Stories’, ‘The Young Forresters’, ‘My Share of the World’, ‘The Castleford Case’, ‘The Orphans of Elfholm’, ‘The Poor Cousin’, ‘The Hidden Sin’, ‘The Exile’s Trust’, ‘My Nearest Neighbour’, ‘The Dangerous Guest’, ‘The Fondling of the Fens’, ‘The First of the African Diamonds’ and ‘The Legends of Ulster’.
Frances Browne died from apoplexy in her home as 19 St. John’s Grove, Richmond on 21 August 1879. She was unmarried and her wealth at the time of her death was less than one-hundred pounds.
A line printed in The Baldwin Project in to relation to Frances Browne states: “Thus it has been, and thus it shall be; so long as the world shall last, circumstance shall not conquer a strong and beautiful spirit”.

The Life and Works of Frances Browne, The Blind Poet of Ulster can be purchased by forwarding a cheque or postal order for €18 to: