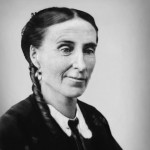 Church bells rang in Richmond, for a soul laid to rest.

She was known by many, as ‘Ulster’s Blind Poetess’
Friends and neighbours gathered, they stood and prayed aloud.
An eerie mist descended, on a land obscured by cloud.

Suddenly from heaven, sun rays shone so clear,
And many ghostly figures, in numbers did appear.
Bards came forth from Ireland, with Burns from Scotland too,
Forgail joined with Carolan, and these were just a few.

Moore came with Swift, with Bronte by their side.
North stood with Blackwood, representing the papers wide.
Then the rhythmic sound of an army’s marching feet,
Many drums were rolling and soldiers keeping beat.

O’ Neill marched with O’ Donnell, Red Hand in the air.
Tone stood with Mc Cracken, beneath Old Ireland there.
The kings arrived from Tara, and Fionn with Tasha too.
Setanta joined with Oisin, Cuchulain and Brian Boru.

Fairies gathered in numbers, and brought their fiddles there.
Frances told their stories, through the ‘Wonderful Chair’
Bridget arrived with Patrick, his staff stood tall and still.
Eunann beside Mohona, Brendan with Coulm Bkille.

Then the heavens opened, and St. Michael did appear.
He raised her gentle spirit, to the fairies vibrant cheer.
The little folk then fiddled, to the angels harping sweet,
Tears of joy soon trickled, from mourners there to weep.

Chorus
Hers was the star that shone so bright,
Though darkness bore upon her sight.
A spirit whispered to her soul,
And there bequeathed a glorious scroll.
A world her own in which to dream,
O glorious glorious dreams.