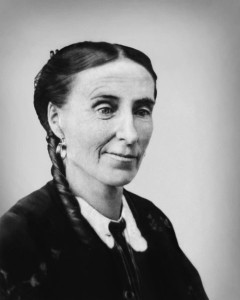 The recent discovery of a photo of Frances Browne ‘The Blind Poetess of Ulster’ is one of the best photographic finds in the literary field over the last hundred years. Sculptors and painters now have a true image of this talented writer.  When our children hear the story of her struggles and achievements, they can put a face to the writer who tried so hard to get an education when it would seem that the chances of her succeeding were very slim.

Until recently few people had heard the name of Frances Browne, but back in the mid 1800s she was to the fore in the literary world writing many poems, novels, childrens books and many articles for newspapers. She was known throughout Europe and as far afield as Canada and America.

Blinded by Smallpox at the tender age of eighteen months, she took an interest in the meaning of words when she was seven years old. If Frances didn’t understand the meaning of a word, she persisted in querying adults and friends until the word was explained. She did not attend school in her younger days and occasionally during the day when her mother had time she would sit with Frances and tell her fairy stories. We all know the fairies were very popular in Ireland in those days.
In later years when Frances became a renowned writer, she understood the value of such stories for children and wrote a famous childrens book called ‘Granny’s Wonderful Chair’.
This was the first internationally recognized childrens book of fairy tales by an Irish author and the continued sales up to the present time give evidence to its popularity.
After her death in 1879 Frances Browne was almost forgotten in her native land and on this subject John Mc Call wrote in relation to the poetess  ‘…yet the fame which she thereby acquired, like all terrestrial things, was but ephemeral at the most, as a lengthening shadow imperceptibly fading away, so that this present dull and prosaic age the name of Frances Browne as an Irish popular lyrist is known but to a very select number indeed’ This piece was written in the 1880s but thanks today to the power of newspapers and the internet we can share information more easily.
It is easy to understand why she was almost forgotten when we consider that she emigrated to Edinburgh to work for national newspapers in 1847 and she only returned occasionally after this date. We must also remember the difficult times in Ireland during the 1800s.There were many diseases like smallpox, cholera, typhus and TB. Cholera was the cause of death of Frances’ two sisters in 1831 aged just nine and sixteen years old. Frances was just fifteen years old at that time. The ‘Great Hunger’ in 1847 killed around one million people and Ireland did not recover from this disaster until around the 1950s

Today much is being done in the northwest to revive the interest in one of our best scholars. A book was published about the life of Frances Browne in recent years and with the help of our local paper we started an annual poetry competition in her memory.  We are also in the process of erecting a monument to commemorate the poetess. But in all our research, even though we had some good leads, we never traced any relatives of Frances Browne and despite searching libraries, newspapers and bookstores on both sides of the Atlantic, we never found any photo or image of Frances.
The recent visit to the Twin Towns by Selwyn Glynn and her husband John from Brisbane was our first connection with a relative of Frances Browne. Selwyn is a direct descendant from the poetess’ brother the Reverend John Browne. To trace a relative of the poetess was a major break through but the good news did not end here.

Not alone had the family connection in Australia got photos of some members of the poetess’ family, they also had a photo of Frances Browne.  A photo of Frances Browne is a mega find and this is the only known photo of Ireland’s first internationally recognised writer of fairy tales. This find will be welcomed and appreciated by literary historians not alone in Europe but also in countries as far afield as America, Canada and Australia. The find will greatly help to promote the poetess further. During the research of Frances Browne, together with fellow historian Rev. Raymond Blair we came across another writer by the name of Frances Browne Arthur who occasionally wrote under the penname of Ray Cunningham. This author puzzled us for a period as it was difficult to find any biographical material on her and we had to be certain that she was not ‘The Blind Poetess’.   Selwyn was able to tell us that this writer was her great great aunt and niece of Frances Browne.
The achievements and progress made on Frances Browne is the result of people working together and recording history for the benefit of future generations. We have to mention John Mc Call’s work back in the 1880s and Chris Mc Donagh’s work in the 1950s. Chris was the founder of ‘The Donegal Historical Society’ in the 1940s. Many locals have taken an interest and helped to promote Frances Browne who gave us one of Irelands best poems
‘Songs Of Our Land’

‘Songs of our land, ye are with us forever:
The power and the splendour of thrones pass away;
But yours is the might of some far-flowing river’
Through Summer’s bright roses or Autumn’s decay…’

Frances Browne’s relatives in Australia have helped us to write another chapter in the story of this remarkable little girl who by sheer determination went on to achieve so much in life. She wrote many childrens books, poems, novels and newspaper articles. She was anti slavery and stood up for human rights. Frances Browne was a woman who was ahead of her time and none is more deserving of a mention in our newspapers or magazines than ‘The Blind Poetess of Ulster’