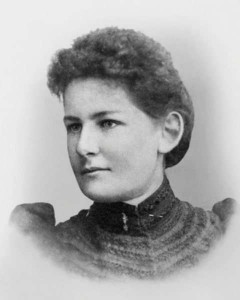 When we mention Donegal writers, authors like St. Eunan, Seamus MacManus and Patrick Sarsfield Cassidy are but a few names that come to mind. Until recently, the name of Frances Browne Arthur, who was the popular writer of girl’s and children’s books in the early nineteen-hundreds, was barely known in her own country. She occasionally wrote under the psuedonym of Ray Cunningham and she adopted this penname from her native townland of Ray in Mannorcunningham, Co. Donegal.

Her father, Reverend John Browne, was the Presbyterian minister in that parish until his death in 1854. He is buried in the old Raymochy graveyard. Her mother was Jane Ramsay and she belonged to the Ramsay family of Lisnennan House near Letterkenny. Reverend Browne had two other daughters named Maude and Mary. Maude emigrated to Australia in 1880 and she was one of Queensland’s pioneers credited with helping to set up a school in the Charleville area around the early eighties. Reverend Browne also had two sons; Robert emigrated to New Zealand around 1880 and I believe his other son (John?) moved to Belfast.

Mary sent the following poem to her sister Maude in Australia in 1883.

Frances Browne Arthur was the niece of the gifted blind poetess and novelist Frances Browne who gained the international recognition as Ireland’s first writer of fairy tales. In Frances Browne Arthur’s book ‘The Secret of the Cedar Rose’, she mentions the story of the ‘Christmas Cuckoo’. This wonderful tale was written by her aunt, ‘The Blind Poetess’, and appeared in the famous book ‘Granny’s Wonderful Chair’.

Frances married a man by the name of Arthur who was a professor of English and may have lectured at Edinburgh university. Most of her books were published in Scotland and they were popular both at home and overseas. Her work can still be purchased today from online bookstores.

Frances Browne Arthur had two daughters. One of her daughters went to New Zealand to be headmistress of Napier Girls High School.  She was in that role when the school was destroyed by earthquake in 1931.

With the help of the author’s relatives in Australia, I found letters written by Frances Browne Arthur to her sister Maude in Australia dated 1914. I was able to establish that the Arthur family resided at 35 Spottiswoode St, Edinburgh and later moved to another location in the city.

In one of Frances Browne Arthur’s letters, she mentions her cousins Janette Davidson and Rebecca Miller. Her cousin Janette Davidson married a John Lockheart and he was knighted around 1914 and she became Lady Lockheart. Janette’s mother was Rebecca Browne, the younger sister who accompanied Frances Browne ‘The Blind Poetess’ to Edinburgh to be her reader in 1847. Her other cousin Rebecca Miller resided in Stranorlar and her mother was Martha Browne, the older sister of ‘The Blind Poetess’.

Her work is listed in the British Library. Oxford University and the National Library of Scotland also have works by the author. I came across a favourable review of one of her earlier works in ‘The Irish Presbyterian’ dated 1st January 1899.